He used a simple dead bolt in the door to stop the action of the rear door latch.

While I loved Bruce's idea, I have a hard time just doing things simple.  Also, this is my second school bus conversion.  When I did the first one I had a combination/key lock then also.  It was a manual combination lock similar to the one pictured below.  The main reason I opted for that type of lock was if I were camping and wanted to go swimming or just didn't want to have to take keys with me I could just dial in the combination and open the door.  Nothing like losing your keys at the beach or the pool and can't get back into the house/camper.

Well, Now I've just got to do One Better!

So I picked up Kwikset Smart-Key digital lock set for half price at a surplus salvage and got to work.

Unlike Bruce's installation, I had to use a slide bolt because the outside portion of the lock would have ended up in the handle well and not allowed the handle to swing. The slide bolt moved the loch far enough away to land on the raised portion of the door.  Also by being on the raised part of the door I also needed an extension piece inside the lock as the school bus door is 2 1/2" thick and I still had to add another 1' on the inside for the dead bolt to ride in.


You can see the detailed installation at Instructables.com.

Got the exterior 90% done.  There are a few finishing (Speciality) touches  that I will post as I do them.

Now For The Fun Part

In modern vehicles wiring harnesses are mostly a synergic component.  This is a 1988 wiring harness courtesy of the Bluebird Motor Corporation.

I unstrung everything except the rear exterior lights and coiled it up in the corner until I decided what I  was going to do.

This is the original wire splicing.  The old black friction electrical tape.

At least when they did the splicing they soldered the wires.  No way they were gonna come apart.

Many of these wires I will reuse as they are in very good shape.  Still very flexible and pliable.  None brittle or cracked insulation.

Even though the harness looks like a bowl of spaghetti, It's very easy to trace.  If you look close at these two wires you'll see the numbers 73 & 74.  Each wire is numbered from end to end.  This is at the rear of the bus.  These two wires were to the flashing school bus lights.  They will be reused for overhead backup lights (shown below).

This is at the front of the bus in the fuse box.  If you look closely you can again see the numbers 73 & 74.  You can find that wire anywhere along  it's run by that number.

Have you ever backed a BIG RIG into a wooded site at midnight?


Well I have.  It can get pretty hairy!  So I decided a few extra backup lights might be in order.

The four amber and red flashing lights at the top of the bus were changed for four white backup lights that are switched and connected to the backup lights that come on when in reverse.  That way I won't drive down the highway forward with glaring backup lights blinding the drivers behind me.  Also when I do backup only the lower back up lights will come on unless I manually turn on the upper lights.


There are also backup lights in front of the rear wheels that will hopefully keep me from backing into a ditch.

These rear wheel lights are switched separately from the backup lights so that I may use them also when edging forward in precarious situations.  I'll be able to see exactly where my rear wheels are at all times.  I've pulled into a lot of campgrounds after dark.

When I was in Mississippi I drove an 18 wheeler.  The company I drove for had rear wheel lights connected to their backup lights.  Saved me many a time backing up into chicken farms in the middle of the night.  Yup, we delivered chicken feed 24/7.  Our feed mill motto, "Chickens Gotta Eat!".

This is the texture paint I bought at Walmart.
Also available at Homedepot.

Yard signs is one of the things I will do while on the
road in the workshop at the back of the bus.
See more examples here. 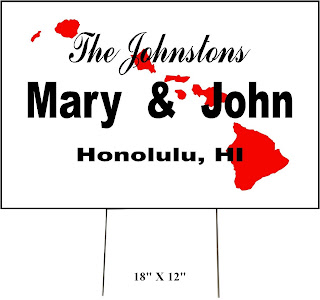 All 50 states are available in two sizes.

Putting Her Back Together

Starting to put her back together.

Putting her makeup on is a time consuming task.  (You girls know what I'm talking about?)  Everything has to be just right.  And if you guys ever tried to help them put it on...  Well, that's another story for another time.  But in the end, after all's said and done, and you step out with your beautiful lady at your side and ALL eyes are on her (and nobody's looking at you) - It was well worth the wait!

Putting the metal trim back.  Wasn't quite sure if I wanted to.  It does give it back that distinctive "Hey you, I'm a Bluebird" look.

Bumper in place.  Almost looks like 'he's smiling compared to when she first arrived.  (See below)  Still have to place new marker lights on top.  Changed upper turn signals from round to square park/turn signal lights.


What you can't tell in the pictures is that the grey paint is an outdoor texture paint. When it dries it has the look of small pebbles or sand.  Up close the grey areas look like they may be made of some sort of stone.  Really cool looking.


Walmart has this texture spray paint.  It will take me 7 cans for the face grill and bumper at $5.77 a can.  I could have gotten by with 6 cans but near the end I got cocky and over confident and, well you can see the difference.  So the extra can was to repair the rush job.  Still for less than $50 bucks I got a neat looking grill and bumper.  Couldn't have done anything else decent for less.

I recently talked to a TV casting crew who got wind of my little project here.  You  may remember the show "Pimp My Ride".  It was a show similar to that.  Here's a little slideshow I did for them.

The weather's fine and it's time to get back on track.  Actually, I've been working on the bus, just haven't had time to post.  I am making an effort to try to post more regularly as things progress.


The inside ceiling is removed and used to skin skin over the removed window openings.  The holes in the sheet metal are where speakers and lights were.

Still deciding on final color scheme but this is a start.

This is when you know the Honeymoon is over.  When you wake up one day and your beloved's body parts are on the bedside table.

Allows easy access to radiator and other necessary parts.

This was actually easier than trying to tape everything.

Starting to look like an RV! (a toothless one)


And a little about the inside.

View towards the rear.
Walk-in Jacuzzi tub/shower in position.


View towards the front.
Walk-in Jacuzzi tub/shower in position.

Well, so much for now.
Check back soon for more updates.
Posted by Leonard at 9:28 AM No comments: